This report follows an invitation from the House of Commons Select Committee on Public Administration and Constitutional Affairs to explore the state of local complaints handling across the NHS and UK Government departments.

It draws upon significant evidence taken from interviews carried out with a wide range of individuals and organisations who have first-hand experience of how the NHS and UK Government departments approach complaints. It also incorporates a review of a wide range of other research reports and over 300 of our own investigation reports documenting complainant experience.

The report highlights three areas that need to change: 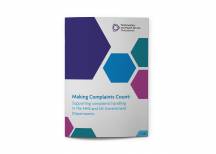 Our research found that the current complaints system does not meet the needs of the public. To resolve this issue, we worked in partnership to design a set of single Complaint Standards for the NHS.

The new Standards will provide a consistent approach and support to frontline staff, and help senior leaders to promote a positive culture that welcomes and learns from complaints. They apply to NHS organisations in England and independent healthcare providers who deliver NHS-funded care.

Find out more about the NHS Complaint Standards.