Complaints about UK government departments and agencies in 2017-18

The complaints we dealt with

We assessed 1,194 complaints to establish whether we could or should investigate them. This compares to 1,451 complaints the previous year.

Four government departments and their agencies continue to make up around three quarters of our investigations. The Department for Work and Pensions made up around a quarter (24%) of the total, followed by the Home Office (18%), the Ministry of Justice (18%) and HMRC (13%). These organisations deliver public services on a very large scale compared to others in Whitehall.

We have written to the permanent secretaries of these departments to share what our casework says about their organisations. Copies of these letters are available below: 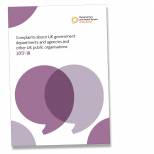 Download a full-break down of the complaints (PDF 1MB) we handled about different government departments and their agencies.