An opportunity to improve

To develop a snapshot into the quality of complaint handling within general practice in 2014-15, we undertook a qualitative review of casework and other evidence.

NHS England, the Care Quality Commission and the Parliamentary and Health Service Ombudsman each took a random sample of casework evidence for review. The cases represented a geographic spread across England. The Parliamentary and Health Service Ombudsman and NHS England each reviewed 50 cases and the Care Quality Commission reviewed 37 cases.

We looked at 137 closed complaint cases from November 2014 to November 2015 about GP practices across England, to evaluate the quality of complaint handling. Whilst the number of complaints we looked at was small, some important lessons can be learned when considered alongside other information.

We wanted to explore what our findings meant at a practice level and what ideas people had for driving improvements in the quality of complaint handling across general practice.'

Healthwatch England surveyed its local Healthwatch network to understand individuals’ experience of complaining to their general practice. 31 out of 152 local Healthwatch responded and provided evidence on complaints services in their own areas. To understand the public’s attitude to complaining,15  we conducted a literature review on complaint handling more generally and identified results related to general practice from a Parliamentary and Health Service Ombudsman survey of over 4,200 respondents.

We held workshops to test our findings with GPs, practice managers and decision makers

We wanted to explore what our findings meant at a practice level and what ideas people had for driving improvements in the quality of complaint handling across general practice.

The case review: a profile of the 137 cases we examined

Before we discuss the themes from our findings, it is important to note where the majority of complaints took place, what they were about and who investigated them.

Most complaints arose in the consultation room, followed by the reception area.

Other concerns included issues with out-of-hours or home visits, telephone communication, access to medical records and governance or policy issues.

People were most likely to complain about staff behaviour.

Complaints classed as ‘other’ tended to be about prescriptions (failures, delays, issuing repeat prescriptions). The least common reasons for complaining to the practice were confidentiality and misdiagnosis.

In some cases the GP investigated and responded to complaints, often about themselves. The complainant sometimes perceived this to be a conflict of interest, particularly where it was unclear what had gone wrong and why. 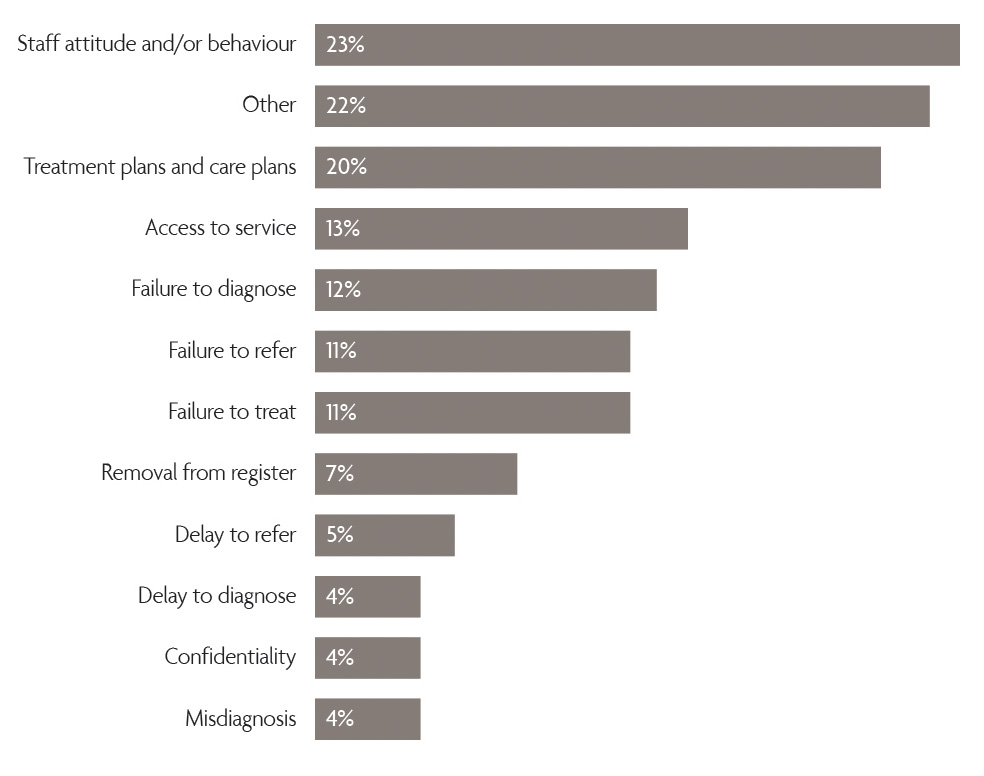 *Not all percentages total 100 owing to rounding

15 Parliamentary and Health Service Ombudsman (2015), What People think about complaining.

About feedback and complaints management within general practiceOverview of findings