This report presents statistics on complaints about the NHS in England from April to June (Quarter 1 2019-20).

Compared to our previous reports, it includes more information on the complaints we have received, assessed and investigated. This will give complainants and organisations we investigate greater confidence in what we do and a better understanding of how our decisions have made an impact.

In addition to the data below we have also published a full data table of complaints received and our decisions about NHS organisations during Quarter 1 2019-20.

As the last port of call in the complaints process, we provide the final opportunity for people to resolve their complaint. We have a three-step process for dealing with complaints about UK government departments, the NHS in England and other UK public organisations.

Not all the complaints that come to us go through our whole process. Where we can, we will seek to resolve complaints earlier in the process and provide complainants with answers more quickly. Our focus is on making the right decision at the right time.

At this stage, we look at whether a complaint is ready to come to us. We usually expect people to complain to the organisation they are unhappy with first, so the organisation has the chance to put things right. We give people advice on how to complete an organisation’s complaints process and ask organisations to do more when we can see that it could help resolve a complaint.

When we aren’t the right organisation to help, we explain why and let people know which organisation can help. The significant volume of advice and support we provide at this step often helps people get an answer to their complaint at this stage. We also look for ways to work with the organisation and complainant to resolve a complaint, without an investigation, at the earliest opportunity.

During Quarter 1, we completed our initial checks on 6,474 health complaints, including complaints continued from the previous quarter. The graph below shows how these were progressed.

At this step we decide whether we can and should investigate a complaint, or whether we can resolve it without an investigation. We look at what happened and what outcome the complainant is hoping for. We also look at whether mistakes have been made that have had a negative effect on the complainant and what has already been done to put this right.

We can usually only investigate if the complainant has been affected personally by what happened, and there is normally a limit on the time between when the complainant first became aware of the problem and bringing it to us.

We will also determine whether legal action is an option. Where we can, we seek to resolve complaints earlier in the process and provide complainants with answers more quickly.

During Quarter 1 we assessed 1,416 health complaints. The graph below shows how these were progressed.

At the start of an investigation, we discuss the scope of what we are going to look at with the complainant. We gather relevant information and evidence from them and from the organisation complained about.

For health complaints, we may need to get expert advice from doctors and other health professionals. We compare what happened with what should have happened, and we look at how that has affected the person concerned.

Of the final decisions we made at investigation:

Decisions made at investigation, Quarter 1 2019-20 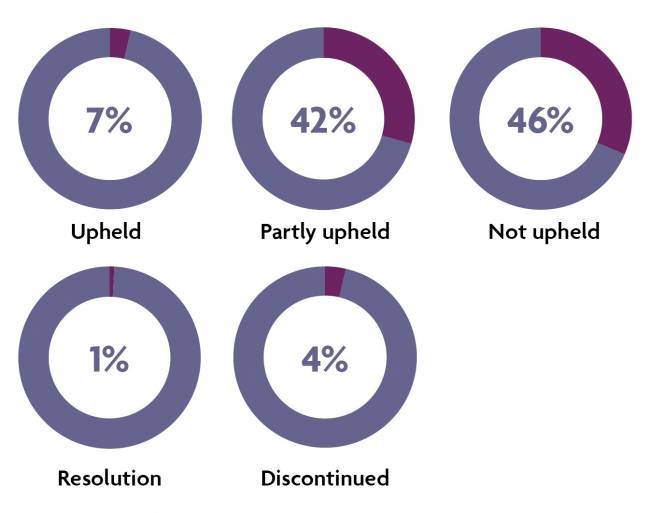 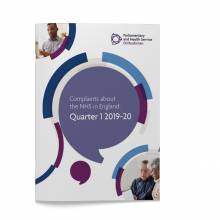